Randolph is the co-founder and former executive director of Project: Poverty, a nonprofit that aims to design, create and implement innovative strategies to reduce poverty. His work in understanding poverty and rebuilding underserved communities is a cornerstone of all he does, fueling his passion for self-empowerment. His high-end bicycle assembly company, the 1854 Cycling Company, was launched in 2016 with the goal of supporting formerly incarcerated people by engaging them in the building of innovative cycles. A portion of every bicycle and bag sold goes toward programs that combat juvenile recidivism.

He is the author of “Me & My Broke Neighbor: The 7 Things I Learned About Success Just By Living Next To Him...,” a 2010 book that has been added to financial literacy curriculums across the country. His YouTube TedX Talk, “Stop throwing breakfast sandwiches at the poor” addresses his experiences with the impoverished and his concept that the failure to understand the different forms of poverty and the attempts by social advocates to find new blanket definitions of the issue are the primary reason poverty continues to grow to the detriment of our society. 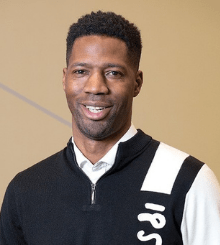