Holmes Ward is an award-winning broadcaster and executive producer whose career has spanned four decades. At WCVB, she is the host and executive producer of “CityLine,” an award-winning weekly magazine program that addresses the accomplishments, concerns and issues facing people of color living in Boston and its suburbs. She also oversees the channel’s public service and community outreach from its Needham headquarters. Her efforts include “Five Fixer Upper,” which renews and refurbishes common spaces for area nonprofits, and “Extreme Makeover: My Hometown,” which raises awareness about the need for affordable housing in the Greater Boston area. She was instrumental to launching Commonwealth 5, WCVB’s first-of-its-kind web-based initiative that promoted philanthropy by matching viewer-donors with nonprofits via the Internet. She has received numerous accolades, Emmy nominations, national awards and honorary doctorates in recognition of her work and community service and was inducted into the Massachusetts Broadcasters Hall of Fame in 2018. 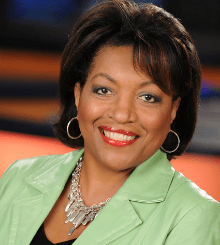