An immigrant from Guyana, Ali is among the most well-known names in the predominantly white local tech industry. As CEO at IDG, Inc, Ali oversees a world-leading technology media, events and research company whose brands include CIO, Computerworld, CSO, PCWorld, and Macworld. Headquartered in Framingham (with a planned move to Needham’s N-Squared Innovation District in 2021), the firm has over 1,100 analysts worldwide and serves over 110 countries. Prior to his appointment to IDG in 2019, Ali was CEO of Carbonite (where he quadrupled the company’s revenue in four years) and chief strategy officer at Hewlett-Packard.

Ali’s numerous accolades include CEO of the Year by the Massachusetts Technology Leadership Council (2018) and Public Board of the Year by The National Association of Corporate Directors New England (2018). He serves on the board of iRobot and the Massachusetts Technology Leadership Council. Ali holds a B.S. in computer engineering, a B.A. in history, and a master’s degree in electrical engineering, each from Stanford University. 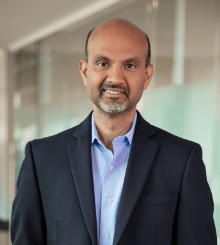